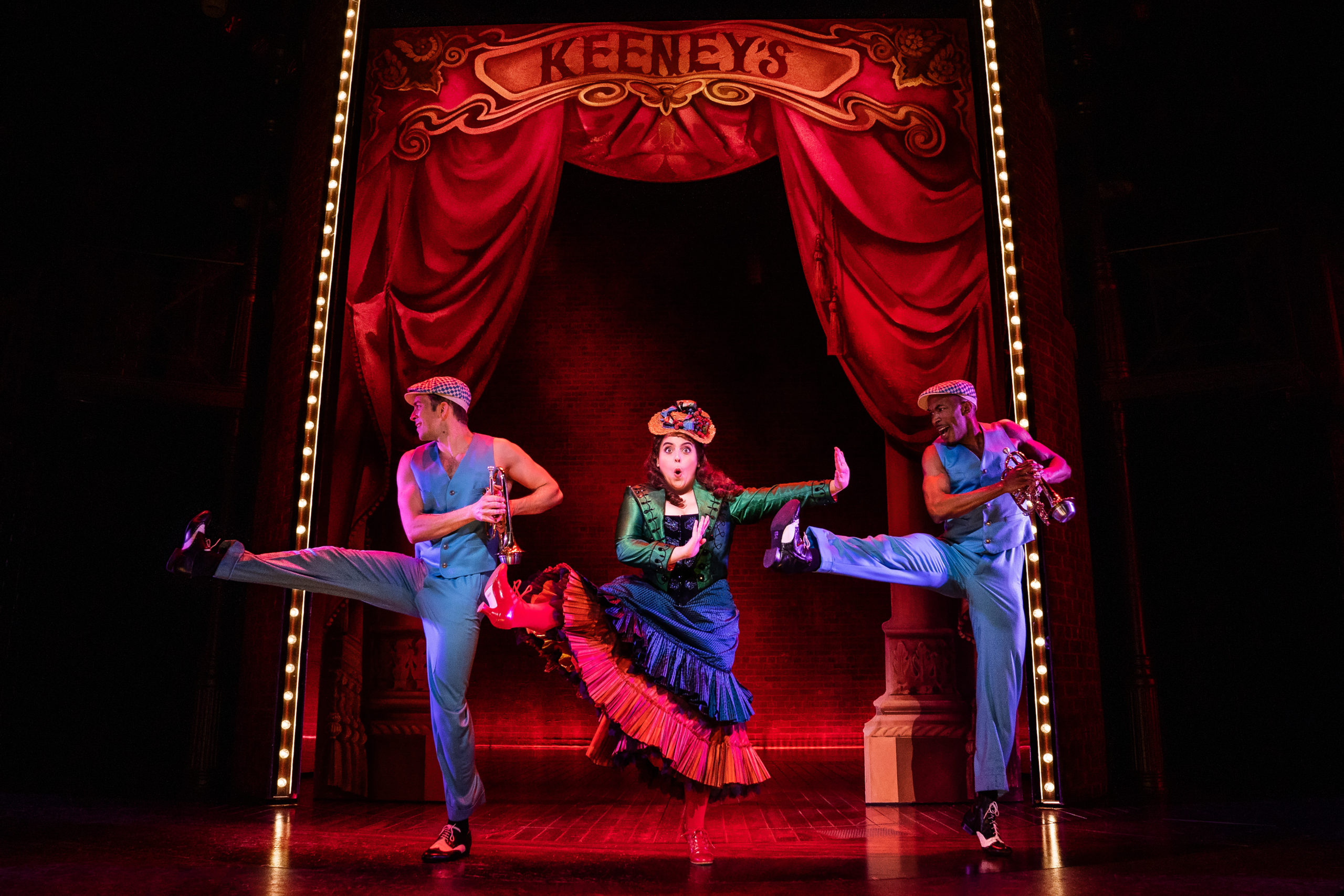 Hello, Gorgeous! Funny Girl is back on Broadway for the first time since its 1964 premiere starring Barbra Streisand. Stepping up as choreographers are a pair of female dance artists of color, both making their Broadway debuts.

They may be new to the Great White Way, but the work of both Ellenore Scott and Ayodele Casel has been seen for years around New York City. Recently, Scott choreographed off-Broadway’s latest Little Shop of Horrors revival and Casel created the dance concert and film Chasing Magic, directed by Torya Beard.

Casel and Scott were tasked with modernizing movements from a hundred years ago for a 2022 audience. Funny Girl, starring stage-and-screen starlet Beanie Feldstein in the titular role, is based on the life of Fanny Brice, a comedic vaudeville actress in the Ziegfeld Follies who becomes a Broadway star. (Maybe you’ve seen the subsequent movie version, also starring Streisand?)

Casel, who trained under tap legends Savion Glover and Gregory Hines, says she never saw herself represented onstage except for Glover’s Bring in ’da Noise, Bring in ’da Funk or “anything that Gregory Hines was doing.” With Funny Girl, she’s bringing Broadway tap dancing to a new level with intricate footwork and a grounded history that parallels the roaring ’20s’ social-dance crazes.

Scott carries with grace the pressure of choreographing not one but two Broadway shows at the same time. Mr. Saturday Night, starring Billy Crystal, opens April 27. Funny Girl opened on the 24th.

Dance Spirit spoke to both choreographers together about bringing Funny Girl to life, making sure Beanie Feldstein gets plenty of chances to dance, and how they found space for themselves in the industry through persistence.

DS: Ellenore, this is the first Broadway show where you’re making your debut as lead choreographer. What is the pressure like knowing you don’t have one show this season, but two?

Ellenore Scott: It is the most exciting and nerve-racking thing that has ever happened to me in my entire life. When [director] Michael Mayer called me in the fall of 2019 and said, “I’m doing this revival. We need a choreographer. I would love for you to make your Broadway debut in that show. There’s tapping in it. I know you don’t do that. So we’re going to hire an amazing tap choreographer to be a part of it. Are you interested?” I was like, “I’ll think about it.” I muted the phone. I was screaming. I was like, “Yes, I would love to do that.” That was supposed to be in the fall of 2020. I feel like the anticipation and waiting to actually see this come to our opening night is super-exciting. Then John Rando, the director of Mr. Saturday Night, who saw Little Shop before everything closed, was looking for a choreographer for this new Broadway show based on a movie. He called me during the two-year pause.

DS: Did you choreograph both shows at the same time or not, since Funny Girl was supposed to happen a year earlier?

DS: How do you do that as a choreographer? What does that look like for you on your daily calendar?

Scott: It literally says “Funny Girl” and “Mr. Saturday Night” every day. Ha! The only way I was really able to do this was because of our amazing associate choreographers. They are the backbone in the rehearsal space and the theater. I was very lucky to have both of my associates at both places. So when I was hopping between the two, there was always someone that could represent what I needed. It was Jeffrey Marc Alkins for Mr. Saturday Night and Jeffrey Gugliotti at Funny Girl. (It is not a prerequisite that [my associate choreographers] need to be named Jeffrey. They both happen to be named Jeffrey.)

DS: When Michael Mayer asked you to choreograph and said he was hiring a tap choreographer, too, did you have a say in that or did he already know that he wanted Ayodele?

Scott: Michael has been a big fan of Ayodele for a long time and watches all of her shows. He was itching to work with her. I think Michael had the brilliant idea of hiring someone who is a genius at what they do. The tap in the show is remarkable and unlike anything you see on Broadway currently. It was in the best interest of the production to hire Ayodele for those specific moments in the show because they are standout moments that I could never deliver. I’m not a tap choreographer.

Ayodele Casel: To have been invited by Michael to put this particular rhythmic stamp on this incredibly iconic piece is a huge honor. It could not have happened with better actors and tap dancers. Jared Grimes (Eddie Ryan) is a master. It’s very meaningful to me to represent this form as a Black and Puerto Rican woman. We can have a whole conversation about the way that tap dancing has been marginalized, but also the way women and women of color have been marginalized in these choreographic spaces. For me, this is a door that I’m grateful has been opened, that maybe should have been opened a long time ago.

DS: How did the two of you work together?

Casel: I wish we had had an opportunity to collaborate more, I’ll say that off the top. Broadway is a fast process. Things have to be delegated and divvied up in a way that everybody can work as efficiently as possible. Ellenore, do you remember us having conversations before we even got into the room about what is going to anchor both of our things? The conclusion we came to together was that music absolutely does that. We honor what the music is telling us to do: vibe-wise, vocabulary-wise, groove-wise, rhythmic-wise.

Scott: The other thing that we both bring to the table in our choreography is honoring the era that it’s from, but also making it feel like the excitement of 2022. Because we’re both women of color—that is inherently in our movement—but also what brings [our dances] together and feels cohesive throughout the entire show. The tap numbers are her numbers. They are stunning and amazing. Then it was fun to collaborate on “Who Taught Her Everything She Knows.” It’s a combo of Jared’s amazing talent and Jane Lynch shimmying.

DS: How do you draw inspiration from the 1920s?

Casel: Even though I am a contemporary tap dancer in 2022, the knowledge that is in my body, in my brain, in my feet and in my heart is the origins of the form. I leaned on what I know historically to be true. The people that were part of my tap-dancing legacy were a part of the Ziegfeld legacy, like the Nicholas Brothers. John Bubbles was part of that legacy. Baby Laurence and Sammy Davis, Jr. are baked into that history, which makes it very easy for me to transplant that into Eddie Ryan [Jared Grimes’ character].

Scott: It was trying to stay true to the Follies. How did they look? How did the Follies feel onstage? What do the showgirls do? In my head, I thought fan kicks, but they are just elegance, lines and lift. Looking back at footage of that era, and trying to highlight the key things that really stand out. Then there are numbers like “Henry Street,” where everyone’s drinking on the block. They’re not gonna be dancing like all these dancers. It was a lot of watching 1920s club dancing and what kind of interesting ways they create shapes with their body. A lot of research was done. But also I didn’t want it to feel like a replica. I wanted it to feel natural to the actors onstage.

DS: Was there anything you grabbed from the original or the movie that we might see onstage?

DS: Was it easy or hard to teach the dancers all these tap sequences, because it is so intricate?

Casel: The word on the street was that the ensemble was very nervous because they knew this wasn’t going to be what typically happens on Broadway, as far as tap dancing is concerned. But I have to say something. It was not hard. We actually taught it very quickly because of the level of focus, excitement and discipline that they brought to the process. They were up for the challenge.

DS: Beanie Feldstein dances so much in this show! How did that come about?

Scott: We are her biggest fans. As someone that has worked with principal actors before, you really never know how confident or up to the movement they’re going to be. A lot of the times [as choreographers], you have versions A, B, C, D. Beanie, every single time, was like: “More, I want to do more. Let me learn the whole dance break.”

Casel: With “Rat-Tat-Tat-Tat,” she wanted to learn the whole thing. She would do the whole number. It’s just that she has other things to do, like sing and say lines. I didn’t have to teach her how to do a time step or flap or shuffle. She knew how to do all those things. The fact that she was up for the challenge with so much joy and determination was a dream.

Scott: Up until we froze the show, we were adding more choreography for her to do.

DS: What advice do you have for young dancers who are pining for the successful careers that you both have?

Scott: This is perfect that you’re asking that, because I ran into a colleague that I haven’t seen in 10 years. The first thing she said to me was, “You’ve been grinding and it is so exciting to see that people are finally seeing the work that’s being put in.” Musical theater and Broadway was never really my ultimate dream. Growing up, I wanted to be a contemporary dancer. I wanted to work at Alvin Ailey and be a modern dancer. Through that shift, I found my absolute joy and love of choreography. My goal is to continue to do what I love, which is to choreograph. Up until now, I have been an associate for only white men. So it is quite a beautiful moment to be sharing this experience with another woman of color, who is also spearheading and being a role model for future women of color. I hope this shows people to put in the work, stick around, and wait for the time to show your excellence.

Casel: I love that. I want to echo what Ellenore just said. I also want to punctuate the fact that sometimes you don’t see the space for yourself. My particular journey as a woman in this artform was very male-dominated. It is now changing. I was so determined to be a part of it because it called to me in such a strong way that I made space for myself. So when those circles happened in tap jams, and they were mostly men, I put myself in those spaces. I showed up to everything. It didn’t matter to me that I didn’t necessarily see myself. I knew that I wanted to be there. I hadn’t thought of it until recently, but that is also what Fanny Brice did. She said, “I don’t see anybody who looks like me, who does this thing in this way that I feel. But I’m going to forge ahead and move forward.” So, I would say to those young people: If you don’t see the space, make it.