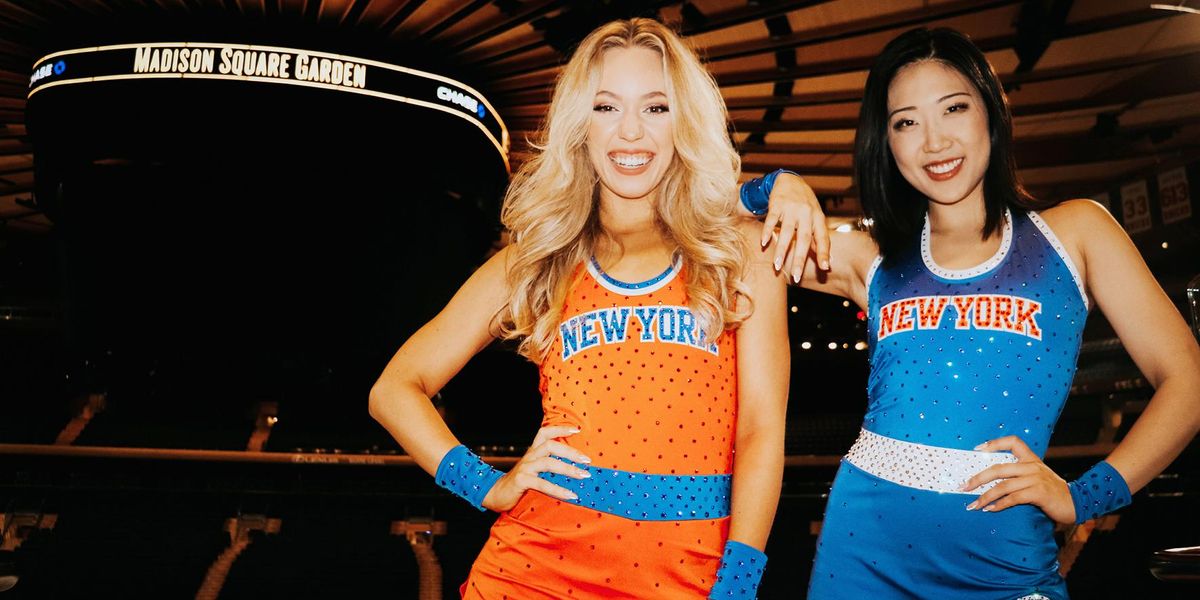 Auditions rarely fail to deliver on suspense. But this? This was the nail-biter to end all nail-biters. Hayoung Roh and Chelsea McCloskey, both professional dancers based in NYC, had made it through what felt like endless rounds of cuts, both on Zoom and in person. Out of the nearly 500 dancers (from 30 states and nine countries) who’d answered the Knicks City Dancers’ open call for video submissions, just 20 remained—McCloskey and Roh among them. “We were separated into six holding rooms, where we kept trying to figure out the math,” Roh recalls. “How many girls are there in total? Who was called back?”

Finally, the women returned to the audition room to dance one last time—or so they were told. Instead, KCD head coach Alyssa Quezada dropped her bombshell: All 20 women had made the final cut. They would be 2021–22 Knicks City Dancers: the latest and greatest edition of one of the most prestigious NBA dance teams. “It was the biggest celebration and the coolest moment of my dance career so far,” says McCloskey now. And that was just the oh-so-perfectly-dramatic beginning. A KCD audition is grueling by design. “A lot is asked of the Knicks City Dancers throughout the season that they’re contracted to be a part of the team,” says Quezada, a six-year veteran of the squad who’s now in her fifth season as coach. So it makes perfect sense that over the course of four long days, aspirants need to show a lot to the all-female KCD leadership team: head coach Quezada, assistant coach/captain Teddi Bircks, co-captains Alexis Tillman and Brooke Fera, and director Amanda Pierce-Martin. (Any returning Knicks City Dancers also have to reaudition each year if they want to claim a slot on the team.)

Between cuts, auditionees are asked to freestyle, learn combination after combination, apply technical corrections and choreographic changes, and perform full-out as one cohesive squad. Extensive interviews play a role too, because KCD members make plenty of media, promotional and charity appearances during basketball season. “We really need articulate, well-spoken dancers who come across with a presence that is representative of New York,” Quezada says. “We want independent, chic, passionate, inspiring, ambitious women, who also happen to be great dancers.” New York City deserves—and gets—no less.

On Board the Court Ship

Like many dance jobs, being a Knicks City Dancer is technically a part-time gig. In fact, McCloskey says the team roster currently includes a few schoolteachers, nine-to-five office workers, fitness professionals, professional dancers and college students. But that “part-time” label fails to capture the intensity of prepping for the jam-packed KCD performance calendar, which starts with the NBA preseason kickoff on October 5. Roh says that the KCD’s thrice-weekly, four-hour evening rehearsals “feel like being shot out of a cannon. We’re learning and taking in a lot, but it’s been really fun.”

“Versatility” can be an overused buzzword in the commercial-dance realm. For the KCD, it’s truly a way of life. Guest choreographers—Lacey Schwimmer, Mandy Moore, Maks and Val Chmerkovskiy, to name a few—come in one at a time to set numbers that range from classic Broadway jazz to Latin fusion to hard-hitting hip hop. Every season, the dancers learn, clean and perform up to 60 complete dances. That way, any basketball fans who show up at all 44 home games won’t see too many repeats.

And get this: Each production number is staged for 16 dancers, so that on any given game night four women get time off. Keep in mind that the KCD usually rehearse at studios around the city because, as Quezada says, “Madison Square Garden always has the most amazing things going on.” All of which means that each Knicks City Dancer gets on the court to learn her track for that night’s formations just six hours (!!) before game time. The KCD pull this off for every game with the help of an intricate grid-plotting system, detailed video footage of all dances, and, of course, the coaches’ and squad members’ brilliant dancer brains. As McCloskey says, “There’s a definite science and precision to how everything works on the court. I’ve never been on a dance team before, so I’m excited to take on all of this new knowledge and skills.”

At a time when some NBA dance teams are reassessing their image and purpose, the Knicks City Dancers keep strutting confidently towards the future. “We’re really proud to represent the Knicks as a group of women in a way that feels empowering and inspiring,” Quezada says. “I think it’s very cool that a lot of other teams are going coed, but I feel like we get the best of both worlds when we perform at halftime and in ‘T-shirt toss’ dances with the 7th Ave Squad.” (That’s the Knicks’ mixed-gender entertainment and hype squad, which includes some dancers who are more breaking-focused.)

For Roh and McCloskey, there couldn’t be a more thrilling way to dance into the post-pandemic era. “I don’t think I’ve ever danced for 20,000 people at a time, and I’ve definitely never danced at Madison Square Garden before,” Roh says. “When I was moving back to New York in May of this year, I could not have imagined that I’d be performing in person here, surrounded by such amazing, strong women. So I’m just trying to soak it all in.”

●Training: Lionville School of Dance in Exton, PA; BFA in dance and BA in dance education from Montclair State University in NJ

●When not in KCD mode, Chelsea: Teaches group fitness at 305 Fitness and Club Pilates locations around NYC and NJ

●Random fact: “When I was a senior at MSU, I got MRSA [a serious antibiotic-resistant infection] from stepping on something while dancing. Luckily, I got emergency surgery, but the doctor almost had to amputate my foot.”

●What head coach Alyssa Quezada is saying: “Chelsea is very, very good at taking direction and implementing corrections, all with a smile on her face. She catches your attention and is a joy to watch. We always loved Chelsea the three times that she auditioned before this, and we’re so excited that this is her year to make it on the team. It’s been an honor and a privilege to watch her grow and mature as a dancer and as a woman.”

●When not in KCD mode, Hayoung: Dances for a few project-based contemporary and modern companies

●What head coach Alyssa Quezada is saying: “Hayoung’s versatility and ‘it’ factor were obvious right away from her reel. We really wanted to see what she’d bring to the room, and she certainly did not disappoint. It was a breath of fresh air to watch Hayoung knock it out of the park, seemingly without any difficulty. And she has such a sweet, humble and grounded disposition. You want to talk to her as much as you want to watch her dance.”